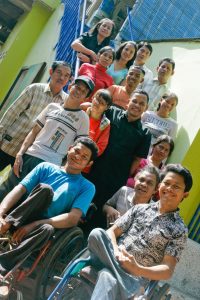 The most reliable statistic is that 4.7%2 of the population has one or more impairment (Cambodian Socio-Economic Survey (CSES), 2004 adjusted by Knowles, 2005 too make it an accurate annual rate), which is one of the highest rates of disabilities in the world. Some of these disabilities are the results of landmines and unexploded ordinance left over from over two decades of war. There are also many people affected by polio, or who have limbs amputated due to untreated diabetes.

There are not many opportunities for Cambodians with disabilities to find work or to learn skills to support themselves, but Rehab Craft Cambodia trains people with disabilities in handicraft production, and provides career opportunities within the organization. Rehab’s artisans produce handicrafts from silver, silk, wood and recycled items. After training, some of these artisans continue to be employed by the organization, while others set up independent production in the provinces and RCC purchases and markets many of their products in their showrooms in Phnom Penh and Siem Reap.

Everyone who works at RCC has some form of physical disability, from the guard at the gate on up to the co-directors of the organization. Rehab Craft Cambodia is a non-profit, local fair trade NGO that has been operating since 1995. RCC was originally funded by a New Zealand organization, but has been financially independent and a certified member of the World Fair Trade Organization (WFTO) [formerly The International Fair Trade Association] since 2004. Today, Rehab Craft Cambodia continues striving to see Cambodians with disabilities and marginalized people improve their standard of living and be recognized as valuable, contributing members of society.